Draft Surveys are to determine the quantity of cargo loaded in, or discharged from a vessel or barge and are dependent on the fact that the vessel or barge is always afloat, and that all the drafts are visible.

As OMEGA SURVEY, we have marine experienced/Captain surveyors to carry out draft surveys. Our background for Draft Survey is based on more than 1000 ships on past.

Some of the common problems during draft surveys one should always be aware of are: 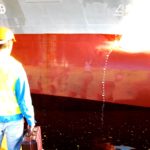